What's on your mind?

Anybody know the devs emails?

I made a video about this recently, but thought I would make a post to let people know. According to some intel from Nitro Type/Math, there should be a new "version" of nitro math coming out very soon...to quote my source..."Things like animations (on trails, cars and stickers) will be working in the next version we release (hopefully by the first week of August)." Just wanted to let people know! I will leave a link to my YouTube video if you are interested. Have a blessed day! 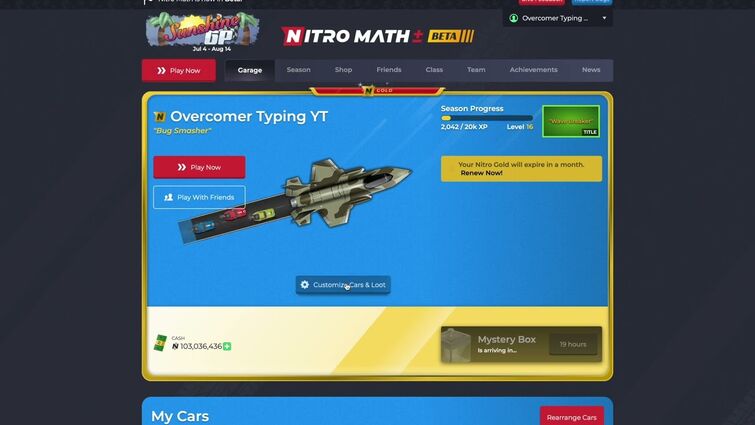 There are LOTS of notable racers (detailed on the List of notable racers page you can find on the wiki), so I will not be able to make every single page by myself. If anyone has time to help with adding these pages in and making sure they have useful content, feel free to do so. For now, I'm just adding in the base content for each page.

Compare this guys stats to mine. How did they win??

This team was created yesterday and somehow is already top 100, the team has multiple famous players on it too… 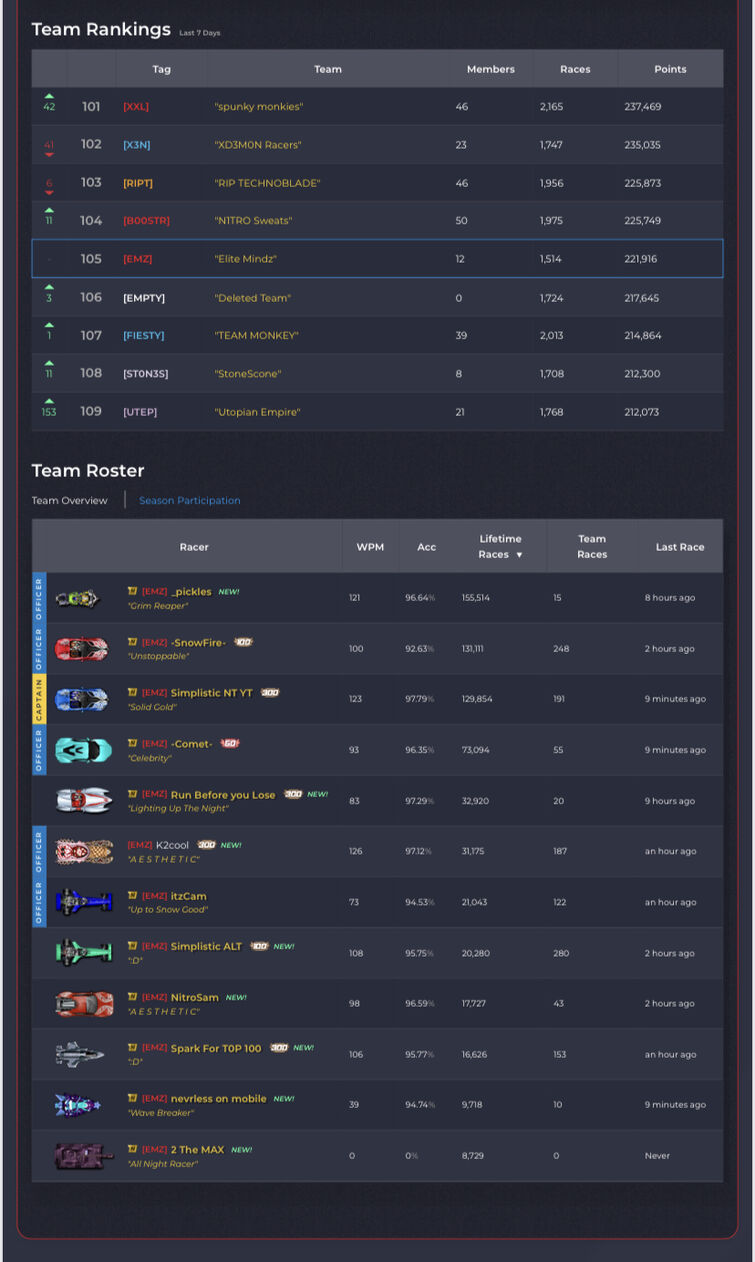 Hey everyone! It's been a long time since I've posted, but I figured with summer still here, what's your favorite summer car NT has ever released? Even if you prefer Xmaxx cars, everyone's gotta have preferences for one summer car over another. Paint jobs? matching trails? Let's hear your thoughts! 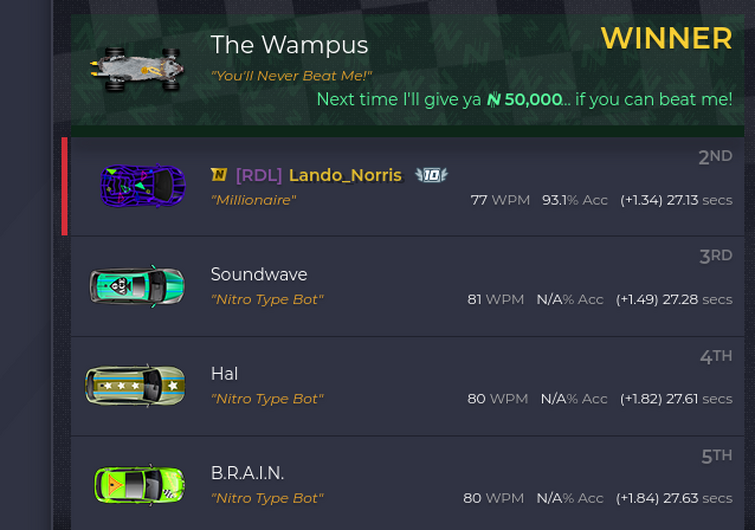 Well wampus smashed me and the bots. 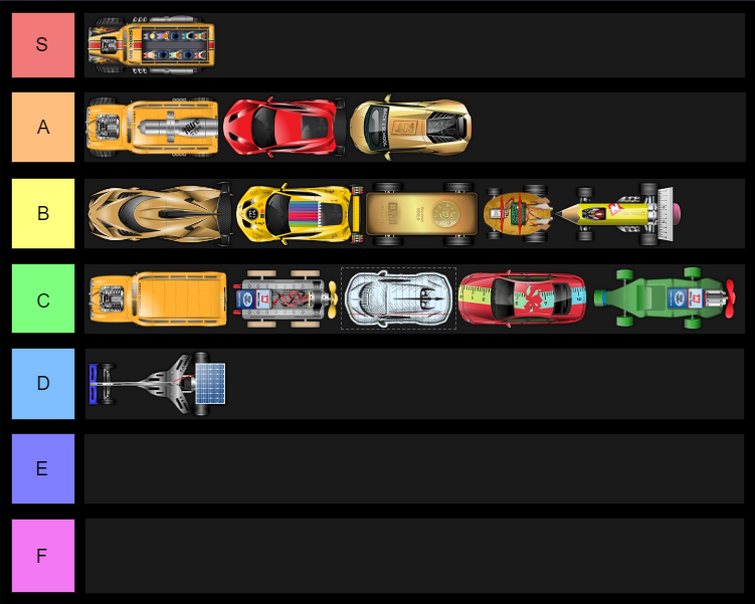 Here is a discussion thread with item shop leaks which is updated daily.

I was just in a race and it was 1st places 1st race and he got up to 51 wpm in the 20 - 40 zone. I think he was botting. Their user was SoftBronzePilot. They could just be good and just got on though.

Vote if you want, this Google Form compiles all of the Back 2 School Event cars + Season 35 (B2S21) cars. If I get a lot of responses, I'll make a tier list with the average responses.

With us moving further into becoming a wiki suited for both Nitro Math and Nitro Type, we will have to change the categories of Discussions a bit to help this out. It has remained unchanged for a while, so it might be a good idea now to do it.

Here are some potential changes we could make. Let me know if you agree or disagree with them.

1) I think it makes sense to rename the "NT Announcements" category to "Nitro Announcements" so that announcements regarding either of the two games can go in that category. Note that any Nitro Math announcements must go under Spoilers until it is available for all members to test, as some people don't want to be spoiler'd.

3) Currently, we allow some off-topic posts. However, now that I think about it, all of those posts could easily go into blog posts, which means that we could potentially remove the "off-topic" category. It also doesn't help that we allowed them but in a minimal state, which meant that only some people could post in that category. Should this change be done, any posts currently in that category will be unaffected and will just be merged into "General," but any off-topic posts made after that change would be deleted. Also, should topics tangentially related like typerace still be allowed here if this rule is enacted? Tell me what you think.

4) Currently, the "three day per post" rule does not apply to Wiki Announcements, which is why I could post all of the posts I have recently, as only one of them are outside that category. However, I am thinking about making this rule also not apply to NT/Nitro Announcements, since I don't think it makes sense for people to not be able to post an announcement regarding NT if they've posted recently, because then they'd have to wait for someone else to post it. (Remember that these must be legitimate announcement posts, otherwise they will get deleted and you will have to wait another three days to post). Speaking of this rule....

5) People have argued that three days is a long time to only post a single thing. I think this rule worked great when Discussions was a lot more active than it is now. Potentially we could reduce it to once every two days or once every day? I don't think we'll go more lax than that, though, as there was LOTS of spam when we allowed three posts per day.

Thoughts about these or have any other suggestions? Reply here about them!

I don’t know if anyone else has noticed this, but the season ends on August 15, for the start of back 2 school, I think the date was assigned because school starts on August 15 in the biggest school district in the world for the amount of schools under the district which starts August 15 making the back 2 school season start as accurately as possible to when school starts, they could have started September 13 which is when New York’s school district the biggest in students starts but that would make this current season end way later.. but this is just my guess, does anyone else think so too?

According to the source code, the Koromoto Rulebreaker will make its first appearance in the Shop in the Daily Items Section tomorrow. I believe this is the first car in a long time to make a Shop debut.

What are some ways to finish races faster and get more season points or xp per race?

Well then, this was a surprising thing to see 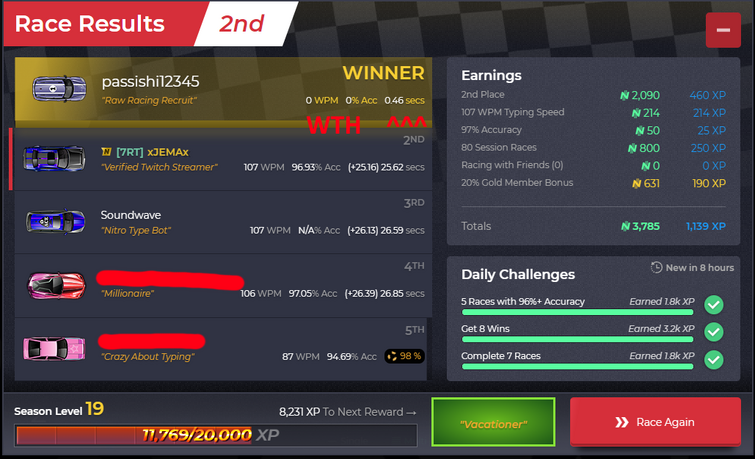 Us (the current admins) agreed to give several members promotions, and after consulting with them to see if they are interested:

First, we have promoted @Beiyudup to a content moderator. As a quick overview, content moderators can edit and move protected pages (such as the home page), delete/undelete and protect/unprotect pages, revert vandalism using the rollback tool, and patrol pages.

And, we have also promoted @DumbDave961 to an administrator. As a quick overview, administrators can do everything content/discussions mods can do, as well as block people, grant limited user-rights, use Theme Designer, and edit MediaWiki pages.

Please congratulate them both on their very-well deserved promotions. Thank you.

Can anyone give me reasons on why to make alt accounts and work on them, I'm currently considering making and working on an alt after I hit around 5k races. Please tell me!